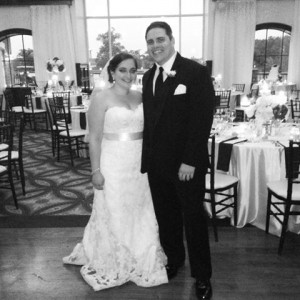 On Saturday, June 22nd of 2013, I DJed a Fantastic Wedding Reception at Saratoga National Golf Club for Mr. & Mrs. Michael & Elina Wolf!  They were a Great Bride & Groom with LOTS of Family & Friends who danced the night away!  I had the pleasure of working with great friends that day as well!  Photographer – Tracey Buyce, Phillip Coltart of Saratoga Wedding Video and Traci Montanino of her always “On Point” Staff at Saratoga National Golf Club!

Yesterday, I received a 5 Star Review on WeddingWire.com from Mike & Elina!  I can not thank them enough for the kinds words which they wrote.

“Mike Garrasi of Music Man Entertainment is a DJ that we would highly recommend. Throughout the entire planning process, from the very first time my wife spoke to him, Mike was friendly, helpful, organized, and professional.  Despite his busy schedule, Mike was always very quick to respond to calls or messages, even when out of the office, or in between engagements.  He was easily able to accommodate our playlist requests, and changes to our wedding party songs, even up to what we thought was the last minute.  He also provided additional lighting for around the dance floor that made the space more festive.”

“When we arrived at the venue after taking photos, Mike was already completely coordinated with the staff and helped make everything move along seamlessly – we did not have to worry about a thing and were able to focus on enjoying time with the wedding party and our guests.”

“During the reception, Mike hit every mark for introductions, dances, and cake-cutting, and kept things moving so we were always on schedule.  All the music that he played, including what we did not request, was danceable, appropriate, and fun – we did not hear anything that made us stop and question his choice.  This next bit we did not expect, but could not ask for more: from the moment the dance floor was opened, until the end of the night, it was NEVER empty.  Everyone, from the flower girl to the grandparents, was out there.  The whole time, Mike was a class act, not playing silly games or talking too much as I have heard other DJs do in the past.”

“We had an outstanding reception from beginning to end, and Mike was a huge part of that.  As I said, we would highly recommend him to anyone looking to reduce their worries about having a great reception.”

Thank you Mike & Elina!  I wish you a lifetime of happiness!